As many of you already know we were commisioned recently to replace the radio mast on the famous Radio Caroline ship the Ross Revenge.  We are extremely pleased to be asked to complete an installation such as this on the iconic ship.

Radio Caroline was first on the air on Easter Sunday 1964 with its last broadcast in international waters in November 1990.  Radio Caroline, the worlds most famous offshore radio station is still on the air today but with only occasional broadcasts from the ship.  The Ross Revenge, which is not the original ship, started life as an Icelandic trawler, however, she entered the history books in August 1983 when Radio Caroline re-launched to a Pan-European audience.

In November 1991 after numerous trials and tribulations during her 8 years service the Ross Revenge ran aground on the notorious Goodwin Sands.  The vessel was badly battered and bruised but the Caroline supporters were not deterred and came together to form a support group to raise funds to maintain and restore her.

Along with ourselves, the Radio Caroline team of volunteers are working tirelessly to restore the ship to its former glory.  Radio Caroline have been keeping a picture diary on the progress that has been made, please visitwww.radiocaroline.co.uk and click on “Ross-Cam”. 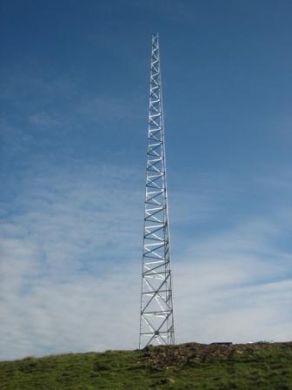 Although a bespoke design, pictured here is the type of tower (TRS Series), being of a triangular construction with tubular legs and angle bracings to be installed on the Ross Revenge.  To see the type of mast being installed click here TRS self supporting towers

The mast is completed and awaiting install.  All of the team here at Radio Structures are looking forward to the final install.

Also pictured are works which were completed to install the Base Grillage onto the deck of the Ross Revenge.