The Ice team have certainly encountered their share of issues on this amazing expedition! This week has probably been the most hair raising to date:

“The Ice Team are camped in the middle of a hideous crevasse field with seemingly bottomless cracks up to 4m across and big enough to swallow a 25-tonne without it even touching the sides. Needless to say this is a very stressful place to be and it is keeping the Ice Team on their toes at all times.

Making matters worse the Ground Penetrating Radar is not working, which effectively means the team cannot always be sure what is underneath them. Although the team is getting a lot of remote support from the suppliers of the GPR and the team is confident of having identified the solution, it has been out of action now for a couple of days” 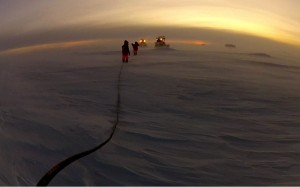 You can read the full blog article from the team here

TRS donated a 9m slimline lattice mast, which, when the GPR is attached and the mast is horizontally mounted to one of the CAT’s, will provide safe passage through the crevasse fields. Unfortunately it looks like the Ground Penetrating Radar doesn’t want to play at the moment;

“Believe it or not I am in ‘the tent’ trying to use the GPR. With me inside the tent is an insulated plastic box which we modified to house the GPR and several hot water bottles to try and keep the unit warm. The tent is trying to shelter me from a 30 knot wind and keep the drifting snow off the GPR unit. It worked to a limited extent but it was pretty uncomfortable and very hard to use the GPR effectively.” 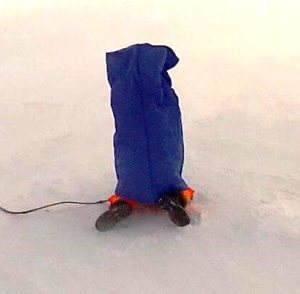 The GPR suppliers and Ice Team are working hard to resolve the issue, but it looks like a world record as arisen from their predicament (probably)

Ian Prickett journeys down the full length of the 500m winch cable which the guys have created to pull back the fuel scoots which are stranded in a huge crevasse field. The video also features a close up of a 20m deep hole in the ice. Impressive.

Let’s not forget why these guys are battling some of the harshest terrain in the world!

Sir Ranulph (Ran) Fiennes, who has been named ‘the world’s greatest living explorer’, has been leading the expedition team and has been planning the expedition for over five years.  Unfortunately, during training in the Antarctic, Ran suffered frost bite and has been forced to withdraw from the expedition. However, under the leadership of the Traverse Manager, Brian Newham, the Coldest Journey will go on.

Sir Ranulph Fiennes, Brian Newham, and the rest of the expedition team have been so moved by the fight against avoidable blindness, and how easily it can be prevented or treated, that they’ve committed to raising money and awareness for Seeing is Believing.

Please join them in their journey and give generously to Seeing is Believing. Donate here.